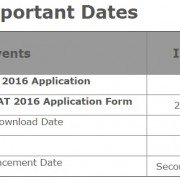 IIM CAT 2016 ( Common Admission Test ) is a national level examination conducted by the IIMs ( Indian Institute of Management ) based on the policy of rotation. This is a computer based test comprised in the quantitative ability, verbal ability, data interpretation and logical reasoning. The CAT score is being followed by the IIMs, IITs, NITs, Faculty of Management Study and Indian Institutes of Science.

CAT 2016 Exam Schedule and other important notifications have been released now. The online registration will be started from 08th August, 2016. CAT 2016 Exam will be conducted by IIM Bangalore for admission to the session 2017 – 18.

The CAT 2016 Registration will be started from 8th August 2016 through the online mode only on the official website of the CAT 2016 The official website is www.iimcat.ac.in on which the registration form will be announced. The registration will go on till the 22nd September 2016. At the time of registration the candidates must fill the required details in the form and select the three test cities from the drop down menu. The candidates will be allotted any one of their preferred centres after the last date of registration. The admit card will be issued through the official site and candidates may get their admit card from 18th October 2016 to till the date of CAT 2016 Examination.

Before filling the IIM Online CAT 2016 Application Form the candidates must have ensure the eligibility criteria as following :

The admission will be done on the basis of personal score in CAT 2016 and the written ability test, group discussion and personal interview. In short listing and ranking the candidates the institution may consider the academic background, academic performance, working background and other similar inputs of the candidates.

Candidates must be well aware of CAT 2016 Exam Pattern. The examination will be held on 04th December 2016. CAT 2016 will be conducted in two sessions on one day. The duration of the paper CAT 2016 Exam will be of 180 minutes. The paper will comprise of 100 question based on logical reasoning & data interpretation, verbal ability & Reading Comprehension and quantitative ability. The CAT 2016 Exam will be held online mode only i.e. (CBT). Each correct answer will be rewarded with 3 marks, each incorrect answer will be punished with 1 mark deduction and no mark will be provided to questions that are not answered. Candidates will be allotted exactly 60 minutes for answering questions in each section and they cannot switch from one section to another while answering questions in a section. Candidates may check the CAT Exam Pattern 2016 from below table.

The CAT Syllabus divided into four sections :
Candidates preparing for the IIM CAT Exam 2016, must be aware of the CAT 2016 syllabus. The syllabus comprises of Quantitative Aptitude, Verbal and Reading Comprehension, Data Interpretation & Logical Reasoning. Candidates have to master these topics in order to score well in the CAT Exam 2016.

The IIM CAT 2016 Admit Card for the registered candidates will be issued on the official website of the CAT conducting authority from 18th October 2016 to till the date of IIM CAT 2016 Exam. Candidates must check the particulars mentioned in the admit card before CAT 2016 Exam Date and communicate with the council if found any error. There is no other ( Offline or by Post ) mode will be entertained to communicate with candidates regarding admit card.

The CAT 2016 Result will be announced on second week of January 2017 through the official site of the authority. The candidates may get their result by visiting the official site and by enter their roll number and name ion the prescribed space during the result date.